For some reason the corrupt U.K. Tory Government has decided that we can only meet a certain number of people in the house at Christmas, but Santa’s Grottos can stay open and Father Christmas is exempt from wearing a mask, I understand that Father Christmases are great people that have kids sit on their knees day in day out on the run up to Christmas, and that meeting Father Christmas is a magical experience for young kids, but in all fairness this is really pushing it and logically it doesn’t add up.

Hideki Kamiya does get on my nerves

I understand that game developer Hideki Kamiya likes to block people that annoy him which is all well and good but what really irks me is that he literally just denies any tweets made in foreign languages, which he is free to do obviously but I think it’s just narrow-minded and childish, and then he decides to write the post telling people not to IN ENGLISH!!! 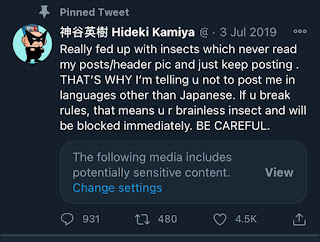 Is he aware that not everybody on the face of this reasonably small planet drifting through space knows how to speak Japanese?! Any fans of Hideki’s work who speak anything other than Japanese might as well not follow him because all it will cause you is disappointment.

Also, if he complains about me possibly being insulting, he’s called most speakers of foreign languages ‘brainless insects’ on his posts so I’d deem a complaint like that hypocritical even though I’ve been reasonably measured compared to some people. 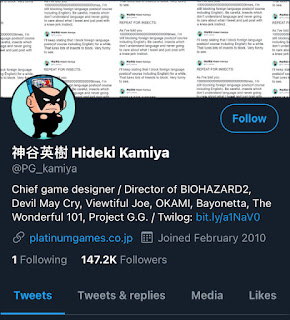 Really annoyed with reality television lately, it just ruins the whole concept of good entertainment and brainwashes the younger generation into being mindless, insecure Instagram roving zombies who THINK they should have a fluorescent orange skin tone.

I’d tell you to search them up but we shouldn’t be giving these jokers any attention or publicity, and you’d probably be horrified at how they earn money for doing nothing but post pictures of themselves on the Internet.

I was sitting around the other day, doing the normal routine (nothing) and I was looking at 'The C64 Maxi'
And I had a brainwave
Would it be possible to port Wolfenstein 3D to the Commodore 64? I've seen a playable version of DOOM ported to the VIC-20, so what about Wolf3D?
I'm pretty sure it would be but I'm more adverse with the C64 than British computers such as the ZX81 and BBC Micro etc.
If you would like to share your opinion please do so in the comments
Thanks for reading,
Joe. H
(NOTE: Logo made by me!)

Alternative Solutions - A lack of them!

I was recently trying to install EDuke32 and Duke Nukem 3D on the Raspberry Pi (Model 3 B+) and noticed something, every source and method I used...
Didn't work
This is because every article from small sites, to forums, to even Techradar!
Used the same method from a clunky old forum posts with a multitude of broken links!
So, my plea is this...
News sites - When you supply these methods, please add a few easy to follow/clear alternatives if one fails in the future. I know some people will tell me this is nigh-on impossible to maintain and I get that but, at the time of writing that tutorial, it is simple, and will help so many people in the future, and if all of them break over time? Well... that's to be expected!
Not everything on the Internet lasts forever, at least not on the surface web, or in the conventional sense. But people will come up with new methods over time.
It's just a simple task of adding alternatives!
If someone from a news site (big or small) is reading this, then please run this by your bosses (unless you are the boss!) Anyhow please think about this and it's importance, not just for game installation but for other things.
Happy surfing!
Joe. H 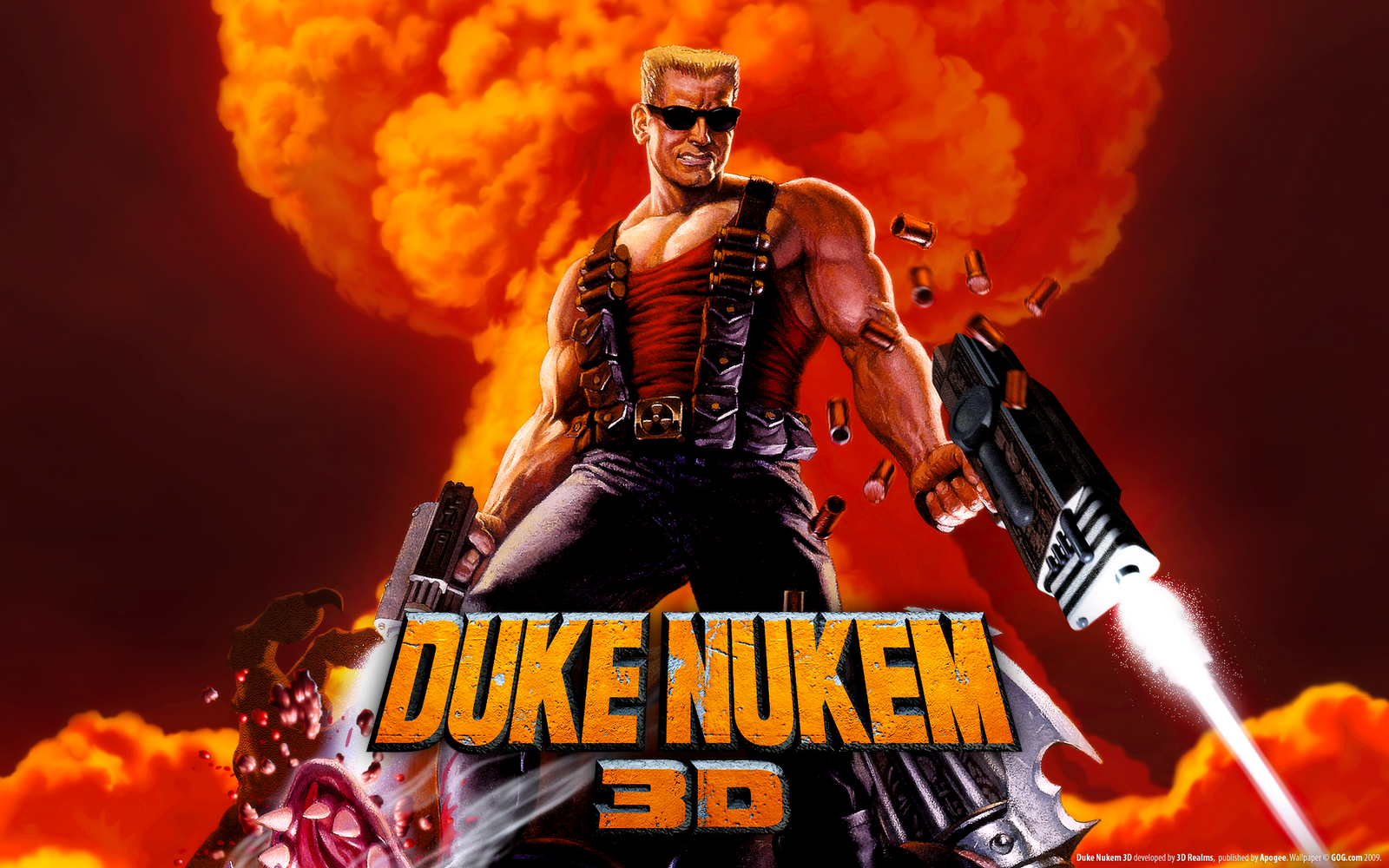 Dear Republicans, 4 Years Ago we were told to get over it, now it's your turn...

Unless you have been living under a rock for the last 4 years, you'll know that the US has been helmed by none other than an certified idiot - who is also a liar and danger to society.
Here is his face: 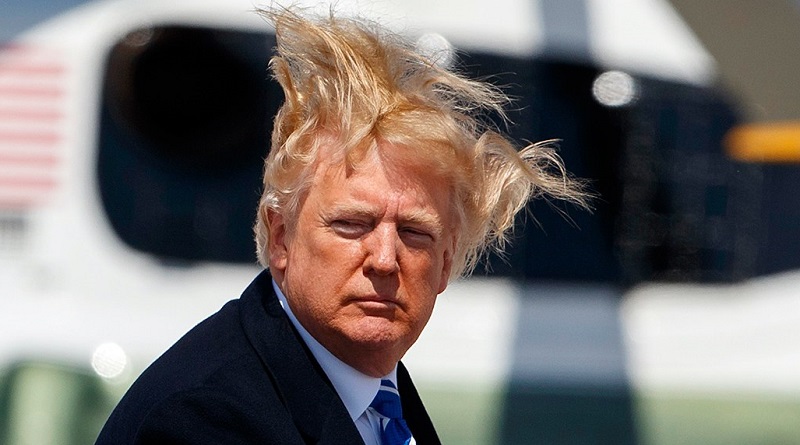 I mean, just look at this wallybrain! You couldn't ask for a worse person to act as president!
So how did he rise to power? Well, he did what a lot of people in Western politics are doing right now, he tricked people into a false sense of patriotism and lied to them, blatantly.
He claimed that he was, and I quote a Republican here: "Making jobs for minorities." Whilst he also refused to condemn white suprmacy. Furthermore, he decided it was a good idea to let COVID-19 (the current virus threat at the time of writing) run rampant over the country he was meant to protected, inciting widespread anger and divide.
He also heigtened North Korea's threat level after his botched negotiations where he agitated the equally dangerous Kim Jong-Un.
The worst thing of all though, was what his so-called 'supporters' told us Demcorats to do - to get over it.
Well, just surveying the current situation using TV interviews, social media posts and comments and vlogs, we can see that, 4 years later, the Republicans aren't following their own orders, bit stupid innit?!
So what I'd say now to Republicans is:
Stop making yourself an embarassment to the rest of the world, because that's how you look, and considering sending this video to your 'President' for me...
https://www.youtube.com/watch?v=oHg5SJYRHA0
Thanks for reading everyone! Sorry it's so short, but I just wanted to deliver some enjoyable content for you whilst I think up (and find the time) to develop some much more in depth posts.
Joe. H
at November 29, 2020 No comments:

Extreme Feminism is getting to dangerous levels now...

I think we can all agree that feminism is great idea that has done so much good for uniting two genders equally. (e.g. the women's sufferage movement) But unfortunately, there are some who take it to extreme levels of stupidity which cause serious danger to the public.
Take one instance a couple of years ago, where a woman on the tube (subway) decided to pour a chemical stronger than bleach into the laps of male commuters for the way they were sitting! This method of sitting has been pathetically called 'manspreading'.
An example of 'manspreading': 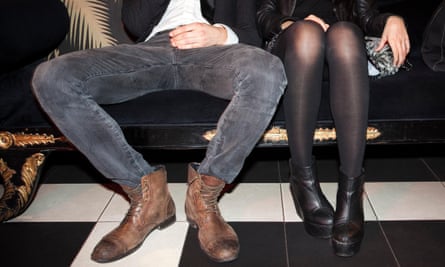 The thing is, there is actually a scientific reason for why men, including myself, sit like this, excluding the fact we don't want our crown jewels in a vice grip:
Here's what happens when someone like me sits with my knees close together: The round ball at the top of the femur will pinch against the outside edge of the acetabulum (the hip socket), straining the labrum that lines the socket. To get into that position, I have to activate the adductor muscles on my inner thighs. That automatically triggers resistance from the abductor muscles on my outer thighs, creating tension that can reach all the way up into the lower back. The second I release the contraction, my thighs spring apart, leaving a gap of about 15 inches from the center of each kneecap, more than three-quarters of the distance to a proper manspread.
Women, on the other hand, have a wider pelvis and thighbones that more naturally angle in toward the body's midline, rather than away from it. Sitting with the knees close together is a stress-free position most of the time, although that changes during pregnancy, when the weight of the belly pushes the knees out.
— Lou Schuler
See?! Not only that, but there is now talk of BANNING a perfectly valid way of sitting on forms of public transport, it has already happened in Madrid! Isn't that a step closer to, oh, I don't know... A LITTLE BIT OF A POLICE STATE! Over the way some bloke sits because it is scientifically proven to be more comfortable and healthy for members of the opposite sex.
So, males, next time an extreme feminist bugs you over the way you sit, claiming it is a sign of 'the patriarchy', move away and tell them what they need to hear. I would even go as far to suggest, if it is a recurring problem, using a car or bicycle!
Anyway, thanks so much for reading, if you aren't a part of this site's community and would be interested in joining, please do! Just follow the general site ettiquette and you'll fit right in!
Thanks,
Joe. H
at November 29, 2020 No comments:

Great to see Joe Biden fixing up the USA after the horror of The Fat Sociopath, to be fair, hopefully the USA will become less of a threat ...